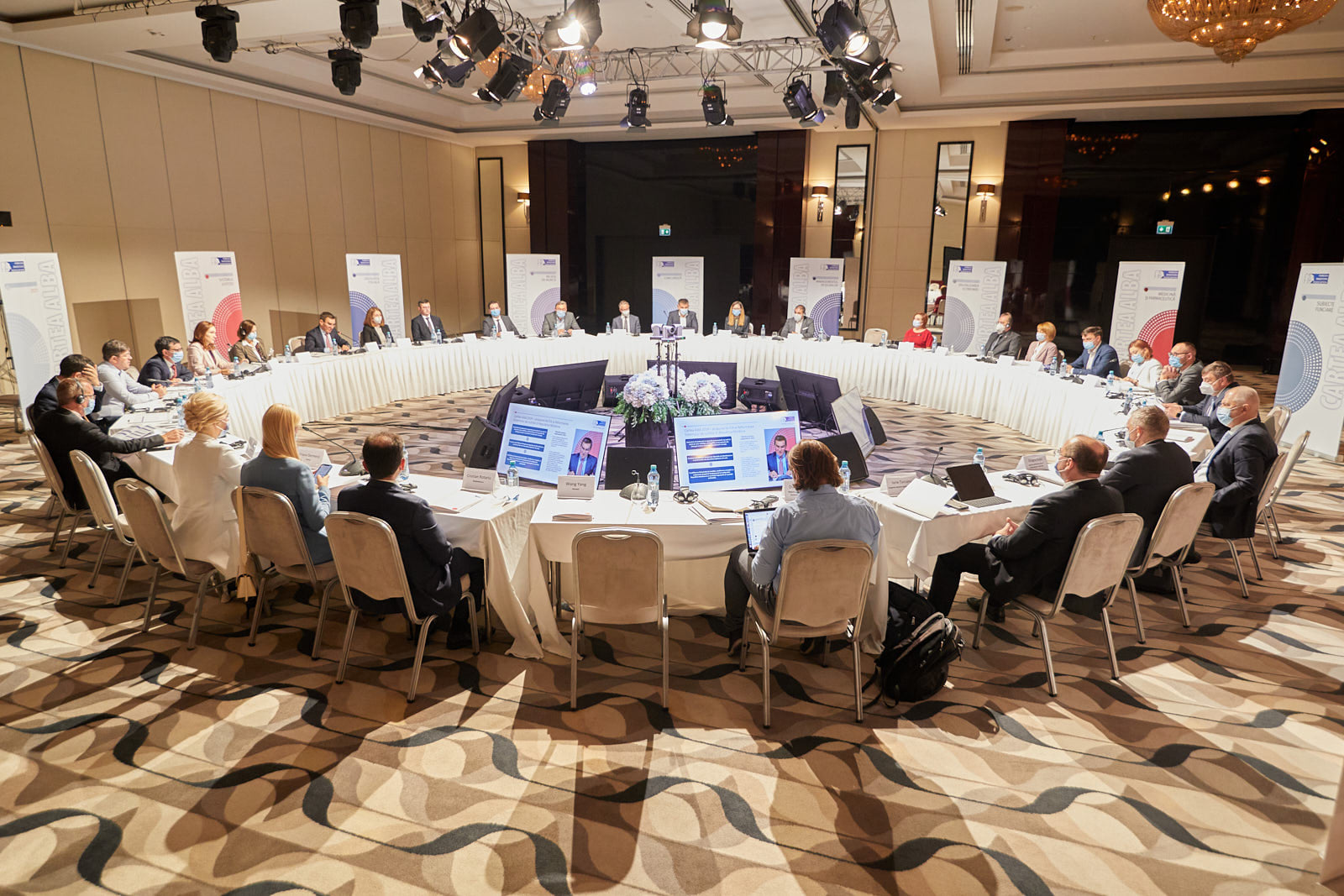 The Foreign Investors Association (FIA) has elaborated and presented the seventh edition of the White Book. The White Book 2021 contains ten chapters: Justice Sector, Taxation, Labor Relations, Competition, Waste Management, Digitalization of the Economy, Healthcare and Pharmaceuticals, Land Issues, Telecom Industry, and Financial System. Over 70% of the investment climate improvement proposals from the previous edition of FIA’s White Book presented in 2019 have been accepted or are being implemented by the Moldovan authorities.

“The Republic of Moldova is in a tough competition for foreign investments with other countries and unfortunately is still far behind them,” noted Dr. Alexander Koss, FIA Board President, Speaker of the Board of Directors of the Moldovan-German company Südzucker Moldova. FIA’s recent study emphasized the higher efficiency of foreign direct investments for the economy that stimulate the improvement of products’ and services’ quality offered by local companies. In our opinion, the key element that may improve the investment climate, is the consistent public policy aimed at reducing corruption, maintaining fair competition, ensuring stable framework conditions for both foreign and local investors, and most importantly – ensuring protection of private property and the rule of law in the Republic of Moldova. Today, the Moldovan authorities have large-scale support both within the country and from external partners, so it is important to use all resources for long-overdue and critical reforms. “

For the complete rehabilitation of the Justice system, in order to eliminate corruption and ensure the fundamental rights of Moldovan citizens to objective investigation and fair justice, back in 2019FIA proposed to create, with the support of the development partners, a temporary (for a period of up to 10 years) special Monitoring Mission, whose members should have access to the files of all criminal, administrative, and civil cases managed by criminal prosecution bodies and courts, except for those that constitute state secret, in order to verify the objectivity and legality of decisions issued at any stage of the judicial process: from the initiation of criminal proceedings until the issuance of irrevocable court decisions, without substituting these bodies and affecting their independence. The FIA initiative received the support of the current President of the Republic of Moldova and the first steps have already been taken. An assessment of judges and prosecutors was initiated with the involvement of “external” independent experts. A methodology is being developed to objectively check the correspondence of the real value of the property of judges and prosecutors to their income. The White Book 2021 underlines that the implementation of the proposed mechanism requires both Parliament’s willingness to introduce relevant amendments to the legislation of the Republic of Moldova and development partners’ support for the draft law on Justice system reconstruction.

It is impossible to stimulate investments growth without a predictable, transparent and clear Tax legislation. FIA proposes to pay special attention to prior coordination of new regulations with all the stakeholders in strict accordance with the legislation on normative acts and business activity regulation, as well as to provide a grace period when the new rules enter into force.

Labor relations is one of the most sensitive, important, and priority topics for all FIA members – foreign investors who implement the latest international practices, thus creating favorable and efficient working conditions for their employees. The White Book 2021 reiterates the need to modernize labor relations and to adjust the legal framework, especially the Labor Code. In particular, in the context of the restrictions imposed due to the pandemic, FIA proposes to update the provisions on occupational safety and health for remote employees.

The Competition chapter underlines that in order to have fair and loyal competition in the Republic of Moldova it is necessary to ensure the independence and, correspondingly, strengthen the status of the Competition Council, as well as to prevent interference of the third parties, including public authorities, in ongoing competition-related investigations.

In the field of Waste Management the Republic of Moldova has made a number of efforts to regulate waste collection, treatment, recovery or disposal, waste water treatment, including based on FIA’s proposals. The Association advocates for further adjustment of the legal framework and improvement of the institutional capacity to meet international obligations in the field of integrated waste management.

In the context of the pandemic, the Digitalization of the Economy at all levels has become an imperative process necessary to ensure the proper functioning of all branches, including ensuring competitiveness and facilitating B2G, B2B and B2C relations. In this context, FIA underlines the need to implement more effectively the tools and promotion at the national level (with Government’s involvement) of economic education of the population in order to use remote financial instruments, to introduce remote education systems, to digitize all processes of state authorities in interaction with individuals and legal entities.

In the chapter on Healthcare and Pharmaceuticals it is noted that the epidemiological crisis has intensified the need to reform the sector, especially hospitals, their staffing, to modernize and digitize healthcare services, has emphasized the importance of primary health care. The Association underlines the importance of elaborating policy documents that determine, based on strategic priorities, the principles for allocating financial resources under the Mandatory Health Insurance System in order to ensure equal opportunities for all healthcare providers and facilitate patients’ access to safe, high-quality and effective health care.

Obsolete legislation in the field of Land Issues functionally restricts access to investments in this area. As a result, this sector does not have the necessary level of productivity as it should, given the specifics of Moldova as an agrarian state. The Association considers it expedient to finalize and adopt a new Land Code, which will increase the level of protection of existing investments, and will allow attracting new investments in agriculture on fair and equal terms.

FIA proposals for the Telecom Industry are aimed at removing obstacles to further modernization and development of technologies. Currently, the quality of mobile services in Moldova is one of the best in Europe, and the operators are the country’s largest taxpayers. At the same time, industry participants need to invest in the development of 5G and VHBB networks in order to ensure the technological development of this area in the future.

Over the past decade, the Financial System has gone through a period full of turbulence, which has directly affected the country’s economy and the well-being of population. Numerous amendments have been made to the legislation on the financial sector within a short period of time. In this regard, FIA has identified challenges and impediments in the activity of financial institutions, as well as elaborated a set of proposals for adjusting the regulatory framework, that will allow establishing a functional and fair balance for all the providers and beneficiaries of the financial sector.

For the first time, the White Book was elaborated by FIA experts and presented in 2005. It is a recommendation document that describes a concrete action plan for improving the investment climate in the country. The White Book reflects the essence of the FIA’s activities as an organization whose member companies believe that through exchange of experience and joint coordination of the efforts of foreign investors and the authorities, a clear understanding of the specific problems and solutions affecting the investment climate in the Republic of Moldova can be created.

Background information: The Foreign Investors Association was founded in September 2003. It became the first non-profit and non-political association of companies with foreign capital actively operating in the Republic of Moldova. The Association consists of 22 companies from 15 countries – these are the largest enterprises with foreign direct investments in Moldova, employing more than 24,000 people. The total volume of investments makes up about 1 billion 400 million Euros in all the spheres of economic activity carried out in the country: agriculture, industry, winemaking, telecommunications and IT, petroleum industry, healthcare and pharmaceuticals, banks and insurance, distribution, consulting and audit, etc. For more details see the website www.fia.md