Infomarket.md - FIA - awaiting an improvement of the business and investment climate in the Republic of Moldova 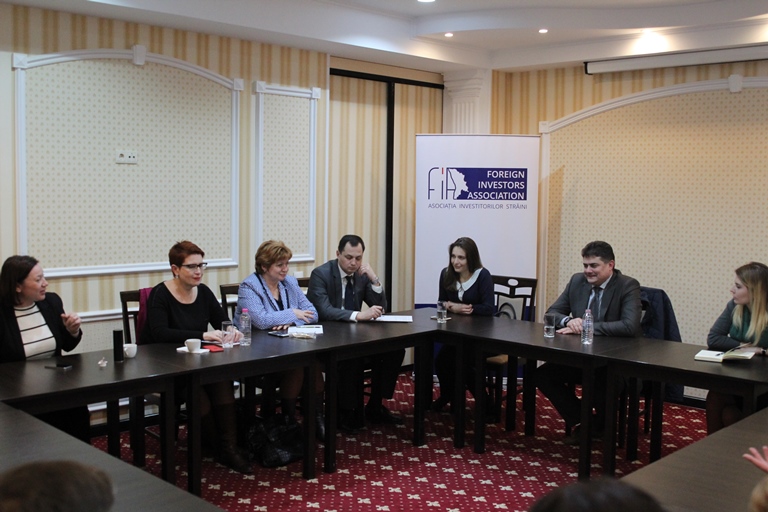 Infomarket.md – FIA – awaiting an improvement of the business and investment climate in the Republic of Moldova

Foreign Investors Association (FIA) in the Republic of Moldova at the end of last week sat down with Octavian Calmâc, Deputy Prime Minister and Minister of Economy. The discussion focused in particular on the legal amendments needed in order to improve the business and investment climate in Moldova.

FIA representatives welcomed the actions taken in the recent period by the authorities to enhance the business climate in the country. At the same time they highlighted the urgent need for a roadmap of measures to further improve it, and emphasized the importance of resetting the relationship with the International Monetary Fund and of restoring economic stability.

A proposal suggested by FIA representatives was, among others, setting up a working group to create a clear body of fiscal legislation for the residents of Free Economic Zones. Minister Calmâc has announced the intention of creating a holding of Free Economic Zones operating a single account; however, this would require significant legislative efforts. If adopted, the measure would expedite and facilitate the cooperation between the residents and the authorities.

The Association representatives also spoke about the need for an assessment of the customs duties introduced on dairy products, as well as for certain categories of industrial goods, such as cement imported from Ukraine. As regarding dairy products, Moldova lacks the capacity to fully meet the local producers’ demand for raw material. The deficit of milk on the market could lead to higher costs for the final consumers and impair Moldovațs export capacity, say the investors. FIA has pointed out that due to a massive subsidization of the the agri-food sector and the construction products sector (cement) abroad the Moldovan products are facing unfair competition from the goods produced by the neighboring countries. In this regard, the Deputy Prime Minister announced that a new subsidization policy would be implemented in 2017, featuring greater transparency and based on a competition of projects.

FIA Executive Director, Elena Varta, highlighted on this occasion too, the necessity of reviewing the list of socially-important goods. In the context of the economic liberalization policy mentioned by Octavian Calmâc, the Association members emphasized the importance of removing sugar and cement, among other items, from the list of socially-important goods. According to the Minister, these are shortly to be excluded, given the price stability of the mentioned products on the internal market and the existence of a healthy competition on this segment.

Further, FIA requested the elimination of authorizations required for sugar exports and imports. The Deputy Prime Minister assured the investors that a mechanism would be set up to simplify export and import proceedings for such products.

A number of foreign investors have expressed their concern about how proceedings are handled, and delayed by the Food Safety Agency, in particular in the case of certifying products already certified in the European Union and holding the CE mark. FIA representatives believe it would be a good idea to automatically recognize CE-marked products within Moldova’s territory. As Minister Calmâc has stated, after the Conformity Law is adopted, any product holding the CE mark will be automatically recognized in our country.

As announced, the Government of Moldova and the Ministry of Economy are now working on an ample program to attract foreign direct investment into the Moldovan economy through measures such as enhancing the investment climate and supporting business. Among the steps already taken is the introduction of a moratorium; however, according to Minister Calmâc, the next step is to change inspection rules and procedures so as to prevent arbitrariness and enable the growth of business and a better investment climate. The Ministry of Economy has expressed its willingness to consider all the suggestions coming from the Association and the business community in general. As per the new rules, customs checks and the inspections performed by the Main State Fiscal Inspectorate will be governed by Law no.131 on State Supervision of Entrepreneurial Activity of 8 June 2012.

Further on this subject, Minister Calmâc spoke about the reform of the Main State Fiscal Inspectorate and the efforts to consolidate the fiscal and customs laws and regulations, effective from 1 January 2017. This consolidation effort will entail unique approval rules and procedures. The new Customs Code and Fiscal Code will be drafted based on relevant EU legislation and will include overarching rules and procedures. All the uncapped local taxes will be abolished and a process to cap them will ensue.

Minister Calmâc has informed the investors that a concept on liberalizing foreign ownership of agricultural land shall be presented for discussion with the business community by autumn.

Deputy Prime Minister Octavian Calmâc also spoke about the intention to liberalize migration policy and thus facilitate inter-corporate transfers and make it easier for foreigners to acquire Moldovan nationality based on the size of investment. In this respect, FIA representatives confirmed the Association’s availability to draft proposals to ease the procedures of obtaining residence permits for up to 3 years.

The Ministry of Economy intends to use and stimulate instruments to attract FDI by offering direct subsidization to companies creating 500 jobs and more, by exempting young start-uppers from inspections and taxes during the first 3 to 5 years, by introducing a flat-rate tax on sales for microenterprises and eliminating the use of entrepreneur patenta. These are the Ministry of Economy’s measures planned for 2017.

As concerns Value Added Tax, it is proposed to introduce two standard VAT rates, of 20% on industrial goods, and of 10% to 12% on agricultural goods across the value chain.

The Association’s Executive Director noted the increased tax burden faced by some foreign investors, in particular telecommunication providers, because of the 2.5% tax that distorts competition, disadvantaging providers of mobile services in relation to other telephony service providers and other service providers in general. What was introduced in 2000 as a luxury tax can no longer be considered as such today when telecommunication services are so indispensable to everybody. The Ministry of Economy has promised to consider the possibility of removing the tax in 2017.

Moreover, FIA members from the electronic communications sector have expressed their concerns regarding the financial burden placed on mobile operators. Especially, with the national currency significant depreciation, the fact that the tariffs in the telecommunications sector are fixed in foreign currency is quite concerning. Along the same line, it is highly important to carry out a comprehensive and centralized assessment of the impact of the regulations in this sector, requested and monitored by responsible authorities.

FIA has reiterated the importance of intensified cooperation between the public sector and the private one in developing laws and regulations. In this respect, FIA representatives expressed the concern of the business community about the fact that just a small part of the bills that can have an impact on entrepreneurial activity is put forward for consideration by the Working Group on Entrepreneurial Activity Regulation.

Minister Calmâc has stated that efforts are underway to create a legal procedure that would require all the bills proposed through Parliament to be subject to consideration by this Group.

Note: The Foreign Investors Association (FIA) is a non-profit organization founded in Moldova in September 2003 by 8 foreign investors, with OECD support, as part of a project that aimed to stimulate reforms and enhance the business environment in South-East European countries.

The Association brings together the largest foreign-owned companies in Moldova that offer a wide range of products and services, covering all areas of the country’s economy from agriculture, to industry, to banking, telecommunication, distribution, audit and legal counseling.